Dr. Chanda Prescod-Weinstein is the Editor-in-Chief of The Offing, an online literary magazine that began as a channel of Los Angeles Review of Books. As described on the site, “The Offing is an online literary magazine publishing creative writing in all genres and art in all media. The Offing publishes work that challenges, experiments, provokes — work that pushes literary and artistic forms and conventions. The Offing is a place for new and emerging writers to test their voices, and for established writers to test their limits.”

I spoke with Dr. Prescod-Weinstein about being an editor, and the future of The Offing.

As an editor, what do you look for in submitted work? What separates good submissions from really stand-out ones?

I am always looking for works that give me the feeling that I will be thinking about them for a long time to come. I should caveat this by saying that the department editors make almost all of the publication decisions, although occasionally I will be asked what I think about a potential piece. I want us to publish work that is unfamiliar but captivating. I want it to keep crossing my mind hours, weeks and months later. For example, Scarlett Ji Yeon Kim’s from the Koreana Cycle is a bilingual series that experiments with form in both English and Korean.  Months after we published it, I’m still returning to it because it speaks to me as a third culture kid. I’ve also been drawn repeatedly to Khadijah Queen’s I HAVE QUESTIONS, which is a deeply personal and provocative think piece in verse about constructing a world without anti-Black police violence.

At Women Who Submit, we encourage women and gender-nonconforming writers to submit their work to literary journals, collaborate, and share resources for clarifying the publication process. We believe in celebrating our rejections and sharing our strategies for dealing with rejection. You’ve been published in both the academic world and the online literary world. What do you do when your work is rejected?

Sometimes the reasons for rejection are frustrating, like I want to write about racism in science and a magazine has recently had a piece about sexism that doesn’t talk about race at all, and they say, “It’s too similar.” In that case I hang onto the piece and maybe submit it elsewhere. Other times, I ask a friend to look my work over and give me feedback about how to strengthen it. When I graduated from Harvard, I couldn’t write for crap. The fact that my work doesn’t sound robotic is something that required a lot of practice. I still see myself as a beginner who is learning, and I am usually willing to accept that my writing needs work. As Kiese Laymon says, “we’re not good enough not to write four hours a day.” So, I know that the more I write, the better I will get, and I hope that this will translate into fewer rejections. I believe in the power of practice.

There have been a lot of structural transitions to The Offing this year with regards to editorial directorship, LARB, and funding. What has that transition been like?

I’m happy to report that I am no longer in the not-sleeping-showering-eating-properly stage of the transition. The first month was hard and involved a significant learning curve for me. It’s hard to get to know a staff that is spread across three continents, where we’re all volunteers, and all have day jobs. The editors, even the ones who decided to step back from being involved, have been magnificent. They worked so hard to ensure I didn’t take things personally, for example, and I think even when I am nagging them about something that isn’t fun but is necessary like fundraising, they hear where I’m coming from. I appreciate them so much.

I’m still learning a lot both from working with the editors and also on the occasions I’ve worked directly with authors, like the piece Stacy Parker Le Melle wrote about the dynamic between Black artists and #BlackLivesMatter. I try as I can to pay pay close attention to what the department editors are selecting, to understand what they are looking for, which I hope will improve my eye. On top of that, Executive Editor/Micro Editor Mahogany L. Browne has been a phenomenal mentor. She stops me from making mistakes while also encouraging me. Executive Managing Editor Andrea García-Vargas has been remarkable about keeping things running smoothly even when for example I became unexpectedly very sick during August and September.

I’ve loved getting to know all of the editors and writers I’ve met over the last few months. I hate that I have to worry about money constantly and that this sometimes requires me saying no to an idea that I actually love.

One great aspect of The Offing is the dedication to intersectionality and elevating the voices of writers of marginalized identities. Do you have advice to editors who want to uphold that same mission?

As a theoretical physicist, I’m used to hearing from senior faculty and top administrators that, “We want diversity but we don’t want to sacrifice quality.” It’s so pervasive that for example this was a comment that the former MIT Provost made to a room full of mostly Black, Latinx and Native American scientists while I was a researcher there. So, when I think about this question it’s coming from: how do I respond to that? The suggestion that there is tension between my race/gender/sex etc. and my excellence is of course wildly offensive. But it’s also tremendously unimaginative. I regularly read works by white people where it’s clear that the writing would have been better if they were able to have a more intersectional viewpoint. Let’s say they are reviewing a TV show that involves characters of color but they don’t take race into account. The writing would have been so much richer if they had been willing to consider all of the show’s moving parts.

So, my advice for editors is to look for what’s missing from the writing of people who don’t write inclusively, and instead of trying to improve that writing, notice that people with marginalized identities often already have that quality built in. It’s a form of excellence that is ignored because seeing the whole picture isn’t always valued. It’s important to see that this isn’t about pigeonholing for example Black writers as “Black writers” but rather recognizing that whether a Black writer has written about Black people or not, their point of view has a standpoint that is affected by who they are as a Black artist. The other thing is that I know The Offing isn’t perfect on this point, and I have tried to pay attention to what voices I think we’re not hearing from often enough. You can’t be passive, and you can’t be focused on how things make you look. You have to think about getting it right, even if that means admitting that mistakes — serious mistakes — have been made.

I don’t feel like I should have to make the case for why marginalized voices matter. We’re people. So, we just do. White women’s writing is also not a placeholder for everyone else. If you are an editor who can’t seem to find excellent works by people who aren’t white, probably what’s missing is an expansiveness in your point of view. 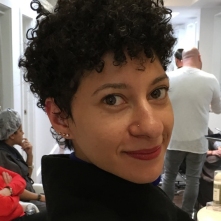 Originally from east Los Angeles, Dr. Chanda Prescod-Weinstein holds degrees from Harvard College, University of California, Santa Cruz, and the University of Waterloo/Perimeter Institute in Canada. One of under 100 Black American women to ever earn a Ph.D. in Physics and an expert in theoretical cosmology, Chanda is internationally recognized for her anti-racist, feminist, and pro-queer speaking and activism. She currently holds a research position in theoretical physics at the University of Washington and divides her time between Seattle and Cambridge, Massachusetts. Her academic work has been published in Classical and Quantum Gravity and Physical Review D, while her social commentary and popular science writing have appeared in Gawker, The Toast, and Physics World. She is also a contributor to the forthcoming On Antisemitism: Solidarity and the Struggle for Justice in Palestine and wrote the introduction for the young adult book Hidden Human Computers: The Black Women of NASA. Chanda maintains a blog on science, society, and social justice at Medium.

One thought on “Behind The Editor’s Desk: Dr. Chanda Prescod-Weinstein”