The most important way to contribute to a community of writers is to read their writing. Buy and read the books and journals of those around you, those you admire, those who you wish to work with, those you call friend or wish to call friend. Of course, we can’t buy every book, but if you can’t buy it, then borrow it from a friend or the library (And by the way, support your local libraries! They do important work for the community’s children and families). We are writers; it’s what we do; it’s what we work for. Show your appreciation for others by knowing their work. 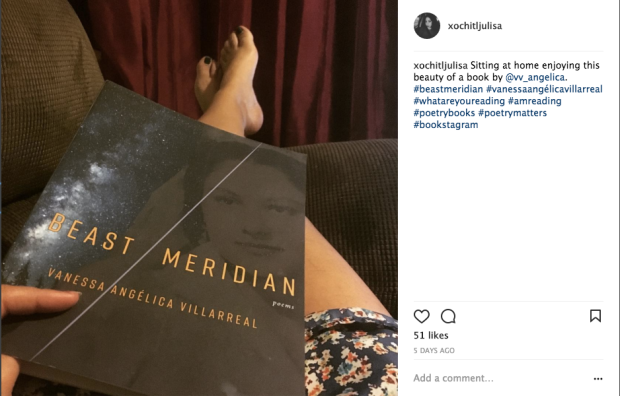 Use social media to share what you’ve been reading and help promote other writers’ work, readings, or events. I like to post photos of my current reads to Twitter and Instagram with #amreading and tag the author if I can. As someone whose first book debuted a year ago, I know it gives me all the warm, happy feels to see my book in a reader’s hands on social media, and I want to give that feeling back. Also, it helps promote their work and possibly gain them more readers and followers. I also like to share photos of events I’m at, especially if they are women, women of color, and writers of color centric events because we need to be archiving more. I think it’s important to capture these moments, and say, yes, these writers were here; their work is important; you should know these writers.

It costs nothing to share what you’re reading or the events you’re attending on social media, so why not give freely and widely? END_OF_DOCUMENT_TOKEN_TO_BE_REPLACED

Women Who Submit is excited to announce that our WWS Los Angeles headquarters was selected out of 106 applicants to receive one of 14 Investing in Tomorrow Organizational Grants from Center for Cultural Innovation (CCI), a nonprofit organization awarding grants to individuals, organizations, and projects throughout California for the arts.

From the CCI press release:

In honor of National Poetry Month, Women Who Submit is hosting a Poetry Submission Blitz on April 9, 2017 from 12pm-3pm at the Arts District Brewing Company. A submission blitz is a call to writers to submit their well-crafted and cared for work en masse to tier one literary journals that historically have shown gender disparities in their publications. A submission blitz is a call to action.

END_OF_DOCUMENT_TOKEN_TO_BE_REPLACED

by  Karineh Mahdessian and Sophia Rivera
(intro by Ramona Pilar)

Las Lunas Locas is a Los Angeles-based poetry collective who aims to empower women through their different identities and cultures. They have a writing circle that has been meeting on Mondays for the past few years to “create a safe space for a community of self-identifying womyn to write, right and rite.” They also host/present/produce and organize a plethora of events and writing workshops in Los Angeles.

This is an amazing group of literary artisans who are inspiring in their level of energy commitment to community, and dedication to forging their own path (literally as you’ll see below) whether or not the mainstream takes notice.

Earlier this year, a group of about 30 of the Lunas embarked on a four city reading tour that began on a whim. Initially an invitation for poets to read at a bookstore San Francisco ballooned into “a wonderful, serendipitous event that grew to be too big to be contained,” according to Karineh Mahdessian, one of the co-facilitators of the Monday meetups  and Lunas organizational juggernaut who helped to make the reading tour materialize. I followed their journey via social media and was blown away all that they were able to accomplish with the power of The Ask and a strong community.

In the tradition of a road journal, Karineh writes about that journey and what it took to take a group of about 30 women to Northern California for a reading tour.

Las Lunas Locas, a womyn’s writing group from Los Angeles, formed into existence in July of 2014 and has met every Monday night at Here and Now in El Sereno. For the past two years, we have participated in various community poetry readings.

In November of 2015, five of the Lunas had the opportunity to read with the Poet Laureates of Los Angeles and San Francisco at Avenue 50 Studios in Highland Park. END_OF_DOCUMENT_TOKEN_TO_BE_REPLACED