Even though I’ve never been published there (yet), I feel a certain kinship with DUM DUM Zine. It came into existence the same year I moved to L.A., 2011. I spent ten years of my youth making handmade zines about poetry and politics, so I’m drawn to anything with ‘zine’ in the title. It features interviews with some of the first writers who I was introduced to in the early disorienting days of searching for my footing in a new metropolis: Kate Durbin, J. Ryan Stradal, Zoe Ruiz, Yumi Sakugawa. A sidebar link list displays Los Angeles fixtures like Skylight Books, Otherwild, and Stories.

DUM DUM is an online zine of poetry, prose, and uncategorizeable ephemera, calling out to the avant garde, the hybrid writers, the genre-melting artists among us who need an outlet that celebrates weirdness. They accept submissions on a rolling basis for their e-zine, and publish a print issue yearly. Don’t expect a traditional format; DUM DUM’s previous tangible productions have included a music/poetry CD in a handmade envelope, a cardboard box, and an accordion-folded chapbook.

I asked some questions of Taleen Kali, the artist/writer/yoga instructor/musician/editor-in-chief and founder of DUM DUM.

How did DUM DUM Zine come into existence?

I was in grad school studying new media writing, photography and bookmaking in 2011, and I became weary of recession-flavored listicles and clickbait, so I started pitching weirdo article ideas all over town.

What inspired you to create it and what was your vision when you started?

The Onion in Chicago was one of the only publications that let me #GetDuM on their site and the first weird story that ever ran was an interview with Kristin Kontrol (back then she was frontwoman of Dum Dum Girls) where we talked about her 5 favorite girl group songs. The format elicited the kind of responses that went deeper than the samey answers I’d encounter during my interview research with other artists.

Doing that kind of digging and writing felt like such a game changer for me that I felt the need for even more. As part of my graduate project, I pitched the idea of an experimental print and web zine. To honor that first article with Kristin and the seed it planted (plus awesome references to a Vaselines song and The Stooges “Dum Dum Boys”) I named it DUM DUM Zine.

As Editor in Chief, what was your process in the beginning for finding more staff editors, attracting submissions, and promoting the site?

When I started hitting the ground running with the zine, I asked a few writer friends if they had any new work. And I loved finding different ways to get subjects to answer questions, or add an element of surprise that led to honest conversation. We had postcard interviews for the first issue.

And then I realized I needed more stories to fill the issue and website, so to populate content I sent out a mass email call for submissions letting everyone I knew in L.A. I was starting a zine. It was a beautiful way to reconnect with my creative community here in L.A., and it’s how I met the women of L.A. Zine Fest!

In terms of submissions and promotions, we’d email writing programs all over the country and also make sure to put posters around town and table at zine and print fairs in order to meet people with interesting voices.

All our DUM editors have either been people in the DIY and artist communities in L.A., or people who came to support zine and music events. It’s a community affair, so we definitely encourage people to come to our events or send us a message if they want to et involved.

What are you looking for in submissions? What separates the really great submissions from the good ones?

We get a lot of glitch poetry and art that seems to speak directly to our sensibility and affinity for hybrid forms, which we would have immediately published in our early days. As we grow more and more, there’s something deeper we’re looking for. There’s gotta be a nugget. That nugget that causes a disturbance, that stirs.

In general, what is your ratio of submitted work to solicited work at DUM DUM?

How did the Text Message Interview Series start? It’s such an innovative idea.

Thank you! That was all Bryxan Amsterdam, a musician and poet I met in Bushwick who was living in Olympia at the time I sent out the first call for submissions. The original set of interviews he did (like the one with artist Emily Reo) were these beautiful hand-transcribed and collaged exchanges. It’s quite web-flashy in its current incarnation with selfies and snapchats galore, bringing the spirit of play and that #DUM feeling into the exchanges.

You truly are a “Los Angeles multi-hyphenate”–editor, writer, musician, yoga instructor. As a multivalent creative person, how do your different creative pursuits intersect? Is it ever overwhelming?

When I first started the zine, that form of DIY self-expression helped give me the courage to play my music live for the first time, and the combination of both helped me realize I’m more of a poet and writer than an editor. Though I absolutely love editing: reading and editing submissions is usually how I access and find new work, which inspires me as a writer too.

Embracing the intersectionality of my art practice has been one of the most rewarding and challenging shifts. Most of the time the different mediums feel like free flowing conduits running through the same channel. . . when I feel overwhelmed it usually means I need to take a step back to see whether what I’m working on at the moment is serving me. And the cool thing about the multiplicity is that a different aspect of my practice can step up to support me when I switch those gears. Yoga has been a huge part of teaching me that lesson of detachment, of allowing the flow and helping me stay grounded when I need to make a shift or try something new that scares the shit out of me.

There’s constantly amazing new stuff out there that’s blowing me away. I suppose we’re unique because we stay pretty close to our journo roots while looking for innovations in print. We’ve seen a lot of alt-lit and millennial pink zine revival trends come and go, and we love it all, every damn printed morsel of it. I think, to counter that in a way, however, our approach to slow media makes us feel most unique. We’re not really interested in trending content; we simply want to publish as many unique, marginalized, lost, found, and reclaimed voices. We want to be a platform and access point for new work, especially the kind of stuff that may not find a home in more traditional publications.

What advice would you give to someone who wants to start her own experimental press and zine?

Embrace both print and online. Get creative with sourcing printed material. Make friends with other small press and zinesters, especially by hosting events! Congregating with the zine and press community is the most gratifying part of doing this, hands down. 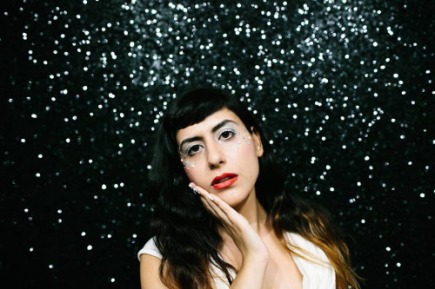 She is a writer, musician and L.A. native. She debuted her solo act at Echo Park Rising summer of 2016, formed a full band and released the “Who The Fuck Is Taleen Kali?” tape via Bandcamp this Spring, voted a “New & Notable” release with “fuzzy, fizzy pop guitars.” She’s headed into the studio this summer to record her debut solo EP entitled “SOUL SONGS” (named after a lyric zine of the same title) slated for release later this year.

A multi-hypenate to the core, she is Editor-in-Chief of the art and music minded DUM DUM Zine and teaches Kali Punk Yoga in venues, galleries, workshops and private lessons throughout Los Angeles.

Poetry, essays and other writing appears in The Onion, FILTER, Entropy, SPIN, Funhouse Magazine, The Bushwick Review, Whole Beast Rag, The NewerYork, TL;DR Magazine, and zines all over the city.

Bio and photo courtesy of TaleenKali.com