A few months ago I gave a TED talk. Although I am used to public speaking and performance, speaking from a memorized script that was supposed to sound extemporized in a packed ballroom under hot lights brought performance to a new level of intensity. This experience was exhilarating, and adrenaline-twitchy nerve-wracking in a way that an independent studio dance concert or an academic keynote is not. Despite the surge of nerves that made my knees shake and my mouth feel taut, despite the fast-slow pace that accompanies production of any kind and makes it feel like the performance will never happen and then like it passed too quickly, I felt satisfied and in control up on that small stage. I was prepared, ready to be up in front of this audience, even if it had taken a ridiculous number of redrafts to whittle the content of a book down to eight minutes of talking.

More than that, it felt complete. I had been writing fiction for several years while maintaining a career as a scholar launching a new phase of research focused on interdisciplinary work between the sciences and the humanities. In those scrawny eight minutes, I bridged separate arenas of my life: dance, public speaking, martial arts, creative writing, and cultural politics. I had finally gotten a chance to be a public scholar, maybe even a cultural critic, something I had longed to be since I finished graduate school and took up my first academic job back in 2000.

Several weeks later, the video went up on YouTube. I was vacationing in the Sierras at the time and when I accessed the Internet, emails about the second incarnation of the talk pulled me out of my alpine torpor. I found the talk referenced on Facebook and Twitter, its YouTube counter clicking away every time someone watched it.

I was shaken out of the sluggish euphoria that comes from spending unrestricted time with friends where my only obligation was to walk my child and dog to the river for a swim. I was thrust onto the brittle ground of self-promotion. The next thing I knew I was watching viewing counts, elated when they jumped by forty, disappointed when the increase was a mere ten. I found myself comparing my viewing counts to the other TED talks that appeared in the sidebar, feeling a niggling disappointment when others outpaced me.

The irony of this was not lost on me. My TED talk was about the excessive attention we, as a society, give to winning. It was about the ways in which competitive spectacle overruns competitive pleasure, in sports and in life, and how that encourages us to outsource play to experts and relegate it to a particular phase of the lifespan. It’s about what we lose when we value product over process. The more the outcome matters, I suggested, the less creative we get to be.

Self-promotion, as an act focused on outcomes (site visits, clicks, book sales) can be deeply uncreative. It focuses on a kind of winning, that is as vaguely defined as it is crucial. It often hinges on arbitrary markers against which we measure our sense of accomplishment. And the bar keeps shifting. Longed-for milestones never come. Or rather, they do come but they fade away as a new one swiftly and stealthily takes its place.

If business is anything to go by, we know that women face a double bind when it comes to self-promotion. Women are criticized for using “feminine speak”, which, we’re told, causes those around us to take us less seriously. And, yet, we when we phrase statements in that direct way that is taken seriously, we’re told it’s threatening. When we point to the gender wage gap, we’re told to get in there and ask for a raise the way men do. And, yet, when women negotiate for pay directly, it’s seen as unfeminine, unappealing, and therefore not worthy of reward. Instead, women are encouraged to negotiate with reference not to themselves but to others: this is for my family; I think this would be good for the team; or I want to make sure I can stay in this job.

Peer promotion can be a solution to this double bind of self-promotion being both necessary and somewhat inappropriate for women. Peer promotion, at first glance, seems to repeat gendered conventions that insist women are communal, not individualistic and that require women put others before themselves. At the same time, peer promotion offers the possibility that we can think outside the model of clicks and viewing counts and toward something less goal-oriented and therefore more creative. In promotion, as in everything else, process matters.

Recently, we learned that White House women staffers adopted a strategy of amplification to counter the tendency of men in a workforce to ignore suggestions made by women and later claim those recommendations as their own. Women staffers would repeat a comment made by another woman, which had been overlooked, referencing the originator of the thought. They would continue doing so until the reflection was taken seriously. It was effective: eventually women’s remarks were brought into the conversation without the need for continual amplification. Peer promotion operates in a similar vein, leveling an uneven field through highlighting the work of others as well as our own.

Thinking about promotion as something multifaceted, I recall a talk I gave at Cardiff University last month. I think about the grad student whose eyes sparked with interest throughout, the American researcher who leaned forward in his seat the whole time, and the conversation I had later with the Maori martial artist who spoke about aboriginal epistemology and its emphasis on subjectivity and play as related to my research into competitive pleasure versus competitive spectacle.

These responses are what I’m looking for. Clicks, shares, views, or even sales don’t matter nearly as much as finding those readers who connect with the ideas. What matters is finding the readers and listeners who are eager to engage with the writing, the ones who are ready to enter into a conversation.

The purpose of projects like Women Who Submit then isn’t just to create the flood in which all boats can rise (although this is a worthy goal in itself). It’s to connect the words, the images, the ideas to the person who is seeking it.

After all, there may be someone for whom those words, written in that book, poem, or short story or spoken in that talk or explored in that workshop are exactly what they needed to hear. For whom, the words resonate with a truth they couldn’t quite express or that speak a reality they’ve kept hidden. Words that give them the courage to do what they’ve longed to do.

When we think about writing as opening doors and opening out to vistas, as unearthing experiences and illuminating hidden corners, we no longer need to put creating, self-promoting, and peer promoting at odds. Promoting our work and that of others can be about process and about experience. When it is, it starts to feel a lot more creative.

For more lessons on movement and writing from Jay O’Shea, join her WWS Fall Workshop on Saturday, November 5, 2016 from 10am-1pm at PEN Center USA. Registration is $80 or $60 for WWS And PEN members. 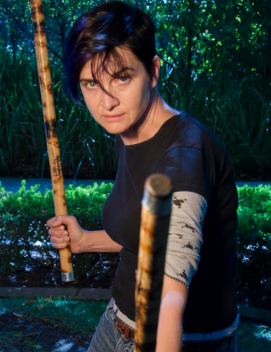 Martial artist and author Jay O’Shea lives and works in Los Angeles. A Professor of Dance Studies at UCLA, she recently offered a TED talk, entitled Beyond Winning, which focuses on the individual and societal benefits of physical play. She has written and edited several books on dance; her essays have been published in three languages and six countries. Her short fiction has appeared in Bartleby Snopes, Toasted Cheese, and in the anthologies Bloody Knuckles, Death’s Realm, and The Female Complaint. She is currently completing a non-fiction manuscript entitled Risk, Failure, Play: What Martial Arts Reveals about Proficiency, Competition, and Cooperation.