The first time I saw Aya was during graduate school at Antioch University Los Angeles. I noticed her immediately because she’s taller than most (while I’m shorter than most), and she has beautiful, long dreadlocks. Her intelligence, however (she’s a Harvard graduate), was the attribute that would remind me of who she was once we left campus and communicated from our respective locations for the rest of the semester. (Ours was a “low-residency” program.) During online conferences I’d read her posts and think: Oh yeah, that’s Aya, the really smart woman. 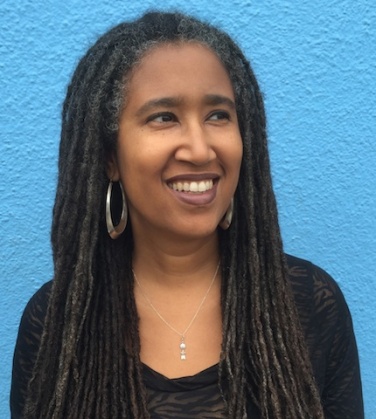 Over the last few years my admiration for her has only increased. Yes, she’s still among the smartest people I know. She’s also a wonderful, supportive friend who’s kinder and more generous than I could have imagined while listening to her advocate for change during grad school.

Our school’s mission statement said it aimed to empower students with the knowledge and skills to advance social justice. When Aya felt our program wasn’t operating from this perspective, she and another classmate took part in a panel discussion on campus wherein they and the rest of the MFA candidates had a conversation about how our program was or wasn’t bearing in mind its implied interest in social justice. At the time, I was merely trying to get through my assignments and improve my writing. Aya challenged me to think beyond my own little world. She was more than a writer and a student. Aya was, and is by nature, an activist and a leader. She’s eloquent, charismatic and brilliant.

She intimidated the mess out of me.

As we got to know each other during a discussion group my fear began to dissipate. I found myself chatting with her one on one after our group discussions. We became friends.

Aya and I kept in touch weekly or bi-weekly as she was finishing her novel and then submitting it to agents. She invited me to be a “check-in buddy” as I was going through a similar process with my own book. We spoke on days when things were going well and on days when things were not. She talked me off the ledge more than once, and I pushed her from her comfort zone and back into the ring a couple of times, too.

When she secured an agent and the agent subsequently sold the book, I felt like the trainer in her corner, jumping up and down, fists pumping in the air as her win was announced. Having witnessed the hits and blows, her triumph was truly something to celebrate.

And with her debut feminist heist novel, Uptown Thief, set for release on July 26, 2016, it still is!

Congratulations, Aya! And thanks so much for chatting with Women Who Submit (WWS). Please tell us a bit about your process in acquiring an agent.

ADL: For about a decade, all roads seemed to lead to one particular agent. I had a friend who worked in her office, she represented several authors I knew, and I kept meeting people whom she represented. I just assumed that one day, she would realize that we were meant for each other. But it never happened. I ended up querying over a hundred agents, and ended up with Jenni Ferrari Adler of Union Literary. She wasn’t even one of the 102 agents. I queried a colleague of hers, and the colleague referred me to her.

At a certain point, I was just going for numbers. I searched for agents who represented African American, Latina, and multicultural fiction. I searched for anyone who used the words “feminist” or “sex work,” and I cross-referenced that with “women’s fiction” which I am apparently writing, but no one can quite define.

To search for agents, I used Publisher’s Marketplace website as a primary tool. I paid for the membership month-to-month, and it allowed me to see which deals they had actually landed. All deals don’t get reported, but it really helps to put things in context. Two agents may both say, I love a fast-paced read with social justice themes and characters of color. But if one has sold 75 books and the other 7, I want to know that. I also used a few Agent Query sites.

Uptown Thief, is described by her publisher, Dafina Books, an imprint of Kensington Books, as a “sexy, heart-stopping tale,” wherein “one smart, sizzling mami robs the rich and protects the exploited–until one heist too many puts everything at stake. . .” 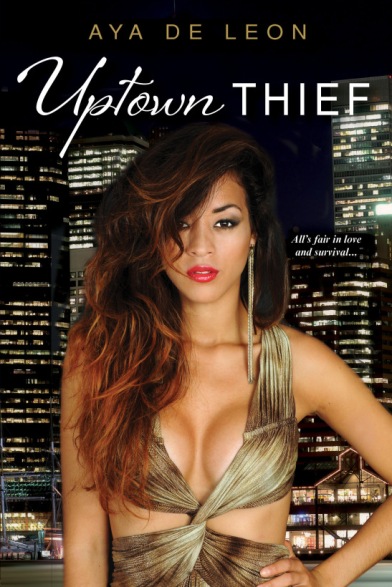 Though at WWS we’re focusing on the submission process, I’d be remiss not to acknowledge that you’re a well-known feminist and the book has a feminist perspective. How does feminism come into play in the novel?

ADL: My book is about a group of women who are protecting women’s health care. For the heist part of the plot to work, they could be protecting anything—a family home, a farm, a school, or a company. But they’re not. They’re protecting a clinic that serves vulnerable, low-income women, mostly of color, in an economically brutal and gentrified New York City. We live in an era where we have attacks on Planned Parenthood—from congress, via media disinformation, and gun violence. The ability to control our reproduction and take charge of our sexual health is a basic tenet of feminism.

Though this is your first published novel, you’ve already made a name for yourself as a successful writer, spoken word artist (a slam poetry champion), and educator (director of the Poetry for the People program at UC Berkeley), and you’ve worked on various novels previously. What other books have you submitted and what kinds of rejections did you receive?

ADL: I submitted a completely amateur package to The Agent in 2005. No real response. Then I submitted a much more professional package (with a query letter!) in 2008, and got a bite of interest, but the project never quite seemed to move forward.

What did you learn via your success with this book that might change the way you’d go back and approach those previous books/submissions?

ADL: I’d have done my homework back in 2005 about how to approach an agent. I practically included a headshot and a spoken word video in that packet. I’m embarrassed by my ignorance.

You’ve been successful submitting to various media outlets. Since 2013 your articles and essays have appeared in: xoJane, Ebony, Guernica, Huffington Post, Reductress, Essence, Writers Digest, Bitch Magazine, Racialicious, Fusion, Quartz, and The Toast. How did you get your start in that arena? And what advice do you have for others trying to break in?

ADL: I started with Bitch Magazine and xoJane.com. Both are feminist outlets that take time to nurture new voices. I leveraged those clips and pitched other outlets, learning by trial and error.

What was one of your biggest faux pas moments in submitting work?

ADL: I did a dual submission with a big, national outlet that only took exclusives. They liked my piece and would have run it. I really blew that one. Do your homework.

WWS has recently started a “rejection brag,” which helps our members feel less alone in that experience. Do you have favorite story about being rejected and then finally being accepted?

ADL: I pitched story after story to The Toast (RIP) and they finally did take one. Same with Reductress (like a women’s Onion). It felt so good to finally get that byline.

As a spoken word artist, you’re an amazing live reader and performer who’s been featured on Def Poetry Jam. Anyone fortunate enough see you present your work in person is in for a memorable treat. Where and when can people catch you on your book tour in the coming weeks?

ADL: I’ll be reading at my book launch for Uptown Thief, July 30th at La Pena Cultural Center in Berkeley 3:30-5:30 – FREE! Other than that, I’ll be at Literary Orphans in Los Angeles in late September, and at LitQuake in San Francisco in October.

For more information and updates on Aya, visit her at @ayadeleon or ayadeleon.com or https://www.facebook.com/ayadeleonwrites/

Toni Ann Johnson’s short fiction and essays have appeared or are forthcoming in The Los Angeles Times, Soundings Review, The Emerson Review, Xavier Review and Hunger Mountain. Her novel, Remedy For a Broken Angel, was published in 2014 by Nortia Press. She was nominated for a 2015 NAACP Image Award for Outstanding Literary Work by a Debut Author. Johnson won the 2015 International Latino Book award for Most Inspirational Fiction. In 1998, she received The Humanitas Prize and The Christopher Award for her screenplay “Ruby Bridges,” an ABC/Disney Television film. She won a second Humanitas Prize in 2004 for the screenplay, “Crown Heights,” for Showtime Television. Johnson holds an MFA in creative writing from Antioch University Los Angeles.  She’s an alumna of the Sundance Screenwriter’s Lab and a 2016 Callaloo Fellow.