Reposted with permission from our friends at Lumen Magazine, where this article was first published on August 5, 2015.

Women Who Submit was born out of a reaction to a couple of gross injustices: a) women are not being published as often nor as broadly as men, and b) women may not be submitting or resubmitting their work as often as men. Men and women of color are published to an even lesser degree.  The founders of Women Who Submit took this information, acknowledged it, and asked themselves what could be done to change this?

The Atlantic published an article called “The Confidence Gap” which posed the idea that “… there is a particular crisis for women—a vast confidence gap that separates the sexes. Compared with men, women don’t consider themselves as ready for promotions, they predict they’ll do worse on tests, and they generally underestimate their abilities. This disparity stems from factors ranging from upbringing to biology.” In their research, authors Katty Kay and Claire Shipman found that women will tend to psyche themselves out of opportunities if they don’t feel close to, if not perfectly suited for the opportunity while men did not have that particular issue.

While there are exceptions to generalizations, there was enough of a commonality to infer that a lack of confidence was one of the reasons why women weren’t submitting their work for publication as often as men.

Confidence is something I personally struggle with when it comes to writing, much less submitting my work for publication. There are layers upon layers of experiences that have transformed me from the bravado-fueled fireball I was in adolescence (my most prolific writing years to date) into a domesticated housecat who refuses to come out from under the bed, shiny eyes reflecting at you from the furthest corner, resigned to remain planted until I’m good and ready to come out.

I’ve been an active member of Women Who Submit for about two years. In that time I’ve submitted work to a total of maybe 10 places. Which, comparatively speaking, is a fraction of a fraction of the amount of submissions other members have followed through on. But comparison is not the point and has never been the point. What brings me closer to crawling out of the safe, uneventful, under-the-bed darkness is being around women who have navigated out of that safe crawl space. Women who have more experience submitting than I do.

The trick, I’ve learned, is to focus on what is actually within my control rather than on being accepted. I can control the content I create, the journals I submit to, the frequency with which I submit pieces. There is not one way to do anything. For example, I’ve acquired four different versions of cover letters to send with submissions. Each of them different and each of the women who shared them with me had success with her version and their reasons why they stuck by it. Hearing sometimes contradictory advice lets me know that the point cannot be about acceptance. That is a faulty, foul gauge of success. The point is to commit to submitting or getting my work ready to submit, at whatever pace feels comfortable for me. Cats don’t live under the bed forever.

The mere act of getting together with committed frequency, either in person or virtually, via Skype or checking in via email, matters. That sense of community is paramount to success, for me individually, and for the overarching goal of working towards gender parity in publishing.

Confidence isn’t some magic superpower only a chosen few are anointed with at birth. It’s something that comes from tangible practicality, from looking at a daunting task and knowing it can be broken down into easily digestible, easily completed tasks. I am inspired by and grateful to the women who have demystified submission by showing me how it’s done. 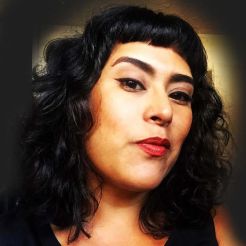 Ramona Pilar is a writer, performer, emotional fluffer and native Californian. She is currently working on a collection of essays entitled “Darth Vader Abandoned his Daughter and Other Thoughts Along The Heroine’s Journey.” She can occasionally be found troubadouring with her band The Raveens.

One thought on “Closing the Gap: On Confidence and Community”